It was the opening game of the Hasty P’s Cup, a regular season showdown between the two local rivals. That first game attracted more than 1,100 spectators to Wellington.

Sam Williamson and Jordan Fuller scored for the Golden Hawks, which took a 2-0 lead into the third period. Lucas LaPalm replied with a power play goal for the Dukes while teammate Zander Latrielle had an unsuccessful penalty shot attempt.

The next Hasty P’s Cup match-up between the Dukes and Golden Hawks is scheduled for Friday, Nov. 18 in Trenton. Game time is 7:30 p.m. at the Duncan McDonald Memorial Gardens. 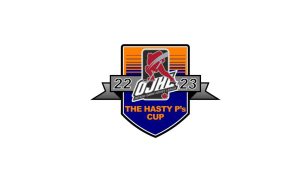 Wasn’t the result we wanted but thank you to all the incredible fans that came out to Game 1 of the #HastyPsCup – over 1100 fans made for an incredible atmosphere in Wellington! pic.twitter.com/cOcmyQv2zj

A 2-1 final and a great start to the Hasty Ps Cup. Ethan Fraser outstanding.

We are back in action Sunday at home! pic.twitter.com/OQEVazwVzR