PHOTOS (submitted by parent but taken by Amy Deroche)

At 12 years old, Taite Crawford has been playing baseball for most of his life. About a decade at this point. His love for the game developed naturally. “From a young age I just liked throwing and running around and catching and hitting,” Taite said. “I just
decided that I wanted to play baseball so stuck with it.”

Taite began playing t-ball in Wooler when he was three before playing two seasons with Belleville Minor Softball. He made the switch to baseball with the Quinte West Amateur Baseball Association for his first season of rookie baseball. The following year, he made the jump to Quinte Royals rep baseball, earning a roster spot as an underage player on the rookie team.

Playing for the Royals, Taite can usually be found fielding the hot corner at third base, though occasionally plays left field or pitches. In fact, he won five of the seven games he pitched last summer.

Perhaps it’s no surprise he was named his team’s MVP when the Eastern Ontario Baseball Association handed certificates in November. 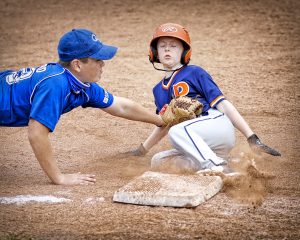 Despite his pitching prowess, Taite enjoys playing third base. His favourite team is the Toronto Blue Jays and favourite player is Josh Donaldson, a former Jay now with the Minnesota Twins. “I like that there’s a lot of hits that go there,” he said, noting that arm strength is key especially to get the ball to first base. “I like that I get to use my arm to throw it. I can throw it with speed so I don’t have to worry about it not making it.”

Other activities also help Taite stay active and benefit is baseball ability. Being part of the CrossFit Belleville Spartans Youth Program is a great example. “CrossFit I like because it has improved my strength and endurance over the time I’ve gone there,” Taite said, noting he gets great arm and leg workouts. He also enjoys learning skills at Canada Goju Karate Trenton/Quinte Dojo. “I like doing karate because it calms me down and helps me relax and teaches me a ton of stuff,” Taite said. House league basketball is another fun activity.
“It’s fun because it’s not as competitive,” Taite said. “It’s kind of like a break and it’s a fun sport to play. A summer or two ago when we didn’t have baseball because of COVID, I ran around in my backyard and shot a bunch. It also really improved by endurance from running around a ton.”

Now, though, as winter nears its end, Taite looks forward to the upcoming baseball season. He hopes its as normal a season as possible. He certainly encourages other kids to give baseball a shot. “I think it’s really fun to play because if you can build team relationships with teammates and have friends, it’s an overall good community,” he said. “It’s fun to play and also helps with your arm strength and endurance.”

His goals in the sports are simple.
“Usually my main goal is just to do good in the games and worry from there,” Taite said.
…
The Quinte Royals are preparing for the 2022 season. As Ontario restrictions continue to ease, the organization will continue to follow provincial guidelines and recommendations from the Eastern Ontario Baseball Association and Ontario Baseball Association.

Watch for updates at www.quinteroyalsbaseball.com.

The Royals have been offering rep-level baseball in the Quinte region for the past 20 years and note that a provincial title for organization’s 14U team in 2019 is a testament to the talent of local ball players and the quality of certified coaches in the area.

All players, regardless of experience, are encouraged to attend tryouts in September.
In addition to the Royals rep program, house league baseball is offered by the Quinte West AmateurBaseball Association.

Sharing a love for basketball

Martial arts is for everyone