Brock Ormond learned from a young age that the hockey community is like a family.

That family has certainly grown over the years for him and he considers the Wellington Dukes to be a big reason for that. The 25-year-old is entering his seventh season as play-by-play announcer for Dukes broadcasts on HockeyTV and YourTV Quinte. He also writes game reports for the Ontario Junior Hockey League club.

“I really enjoy the camaraderie and just being able to work as a team. The Dukes are so much like a family. There’s the same people that come out every single game. Seeing volunteers like Doug Robinson, Betty Masterson as well as Dave Wakefield and so many others, it feels like you’re part of a big family along with the team on the ice,” Ormond said. “It’s really outstanding that way.”

Away from the rink, Brock is the only child to parents Lisa and Mark Ormond, but it never felt that way growing up. The family has billeted hockey players for so long that Ormond went from having “older brothers” to having “younger brothers.” 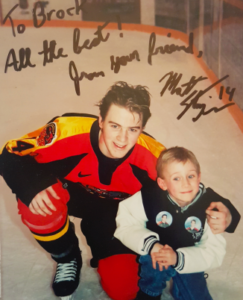 The Ormonds became a billet family for the Belleville Bulls in 2000 when Brock was just four and continued doing so until the club relocated to Hamilton in 2015. Matt Stajan, who went on to play over 1,000 NHL games, joined the family as a rookie with this Bulls as did Paulo Colaiacovo.

“Growing up it was so fun having the players,” Ormond said. “They felt like the older brothers I never had. Stajan comes in at 16-years-old and turning 17 that year and he treated me just like I was his little brother.”

After the Bulls left town, the Ormonds billeted players from the Trenton Golden Hawks for a couple seasons and now have been do so for the Dukes ever since. The long tenure of billeting for family has enabled Brock to experience it in different ways.

“I started out as a four-year-old and then growing up the guys started to get closer and closer to my age so then it ended up becoming like we were the same age and then by the time I got older there had players coming in that were younger than me so then I became kind of the defacto older brother to some guys,” Ormond said. “It was really neat to have that extra body or two or three in the house to really get to know and develop a good relationship with.”

Those relationships sometimes continue once the player has moved on.

Chris Mifflen lived with the Ormonds during the 2007-08 season and was part of the Bulls team that advanced to the Memorial Cup.

“He was only here for one season, came earlier that year in October in a trade and he fit in so well,” Ormond said. “He had the biggest personality you could ever imagine in a player and a person. He was an outstanding individual and still comes and visits us.”

In more recent seasons, the Ormond’s billeted Ben Woodhouse for two of his seasons with the Dukes.

“He was a guy that came in and felt like he was part of our home for years,” Ormond said. “He was such a down-to-earth kid, really helpful around the house and he just felt like a true younger brother that I never had.”

Ormond encourages anyone who has the space to consider billeting for their local hockey team. Check the team’s website for contact information as there is usually a billet liason.

“It’s a very worthwhile rewarding experience, especially for parents of young kids,” Ormond said. “You can have the players be like their surrogate older brother playing mini sticks in the hallway like I did with the players at my house. I would definitely encourage anyone who’s willing to billet to reach out. It’s a lot of food, a lot of space that will be needed for these players that are growing, but it’s absolutely worth it in the end.”

Ormond played a lot of house league hockey growing up and one year of rep for the Belleville Bobcats (before they became the Jr. Bulls). He enjoyed being on the ice, but enjoyed the broadcasting side when watching games on TV. So much that he started practising on his own.

“When I was younger I would turn down (the volume on) my video game or a real game and commentate on it,” Ormond recalled. “That’s kind of where it all started right from a young age. Some kids have different interests and different things they want to work on or different things they want to be when they grow up, but I was fixated on that and eventually the opportunity came to be able to go to Loyalist College.”

Calling a live game was certainly challenging to learn compared to do so on a television screen.

“There’s a lot of things happening during a live game so you have to keep track. I do the games mostly by myself but sometimes I’ll have a colour person,” Ormond said. “It’s definitely tough to pick up everything that’s going on on the ice even with a colour person because there’s so much happening. I just try and stay focused on the play at hand and if I catch something off to the side I’ll make mention of it. Just with more practice and repetitions I’m getting better and better over the last six-seven years at being able to really track what’s going on.

“I do other sports as well. I’ve done football, basketball, a little bit of baseball, soccer as well and I’ve even done some track announcing. It’s all different elements involved to it, but the general basis of it is keeping up with what’s happening.”

His interest in broadcasting led Ormond to volunteering for Cogeco Belleville (now YourTV Quinte) to get his required volunteer hours.

“I got to learn different behind-the-scenes work on the TV side of things,” he said. “I was supposed to get 40 hours of community service in high school and I ended up getting way more than I could have ever imagined.”

Ormond was accepted into Loyalist College’s journalism program in 2014 and not only started learning different journalistic elements in online, print and broadcast, but quickly got some great hands-on experience broadcasting Bulls and Dukes games and picking up a part-time job along the way.

Eventually Ormond landed a full-time job with Starboard Communications as a reporter for InQuinte.ca, 95.5 Hits FM and Cool 100.1.

While Ormond, like most hockey broadcasters, have ambitions to work at the professional level one with the NHL being the dream job, he recognizes he’s got a lot of learning to do first.

But, he loves his InQuinte job, which includes covering the AHL’s Belleville Senators and his work with the Dukes.

“I’m still very happy and energized with what I do in Quinte,” Ormond said. “I’m in a good spot right now and where I want to be.”

The Quinte Red Devils Return to action, looking to be top in province