There’s something about team sports that Clover Boyd loves. It doesn’t matter if it’s volleyball, soccer or rugby. “Probably just working with a team and being able to accomplish something together,” she said. 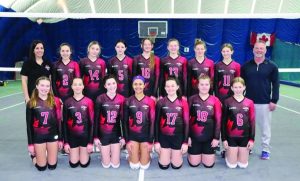 Clover, who is 14, wants to help her team in any way she can and looks for a role where she can make a difference. Take volleyball, for instance, as she is a setter for her Belleville Ravens club team. She joined the Ravens about two-and-a-half years ago after first playing the sport in elementary school. She loves playing the setter position.

“You’re part of every single play so you really have to know where to put the ball every time so that a hitter can get to it and to make sure they can get the kill,” she said. “It’s difficult because there’s so many people depending on you to get the ball up to hit it.”

Her longest tenured sport is soccer as she started playing around age 4 in Quinte West and when she was nine joined the Belleville Comets club program. Clover has always played as a defender in soccer, which suits her desire to play a physical style.
“I love being able to just stop whoever is coming,” Clover said. “My favourite part is tackling so being able to tackle someone legally and knowing that you helped your team keep a goal out of the net.”

Perhaps it’s not surprising she was a natural fit to join her high school rugby team in Trenton this past fall. Her dad, Terry, encouraged her to give it a try. Playing as a prop (forward), there were a lot of rules and other aspects of the game to learn, but Clover
said she benefited from the junior and senior teams practising together. Once again, she loves the physicality. “It was definitely a lot different than soccer, but I feel like the seniors on the team really helped and our coaches were amazing,” she remarked. “It was definitely really weird when I first started, but once you get the hang of it, it’s really fun.” 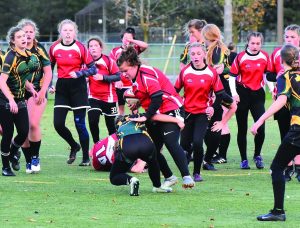 Recently, she added another sport to her repertoire at school: badminton and she’s also preparing with the Ravens for the Ontario Volleyball Association provincial championships in April.

Playing so many different sports, shutdowns were a challenge for Clover, but her teams still tried to make the most of any opportunities to prepare for returns to the field or gym.
“Our coaches were amazing. We had home workouts and things we could do so that we were still busy and ready so when we could go back,” Clover said, adding video meetings were a positive.“We could feel like we were still part of a team and not just by ourselves in lockdown.”

Thinking long-term, Clover has ambitions to get a scholarship for volleyball or rugby.
For now though she’s thinking about team goals. “Coming up I’m hoping we do really well at provincials for volleyball,” she said.

For more information about Ravens volleyball, check out www.bellevilleravens.ca.