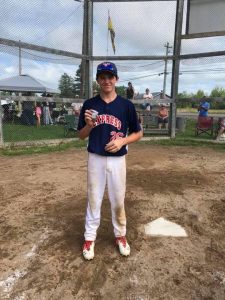 PHOTO
Brody Nielissen competed with the Napanee Express U14 boys fastball team at the Eastern Canadian championships in August 2021.

Softball Napanee has a longstanding tradition of success with its Express rep teams and Brody Nielissen is pleased to have experienced it.

Despite a number of provincial shutdowns the past two years due to government restrictions, the Express have managed to get limited seasons each summer and Nielissen and the U14 boys team have won back-to-back Ontario Amateur Softball Association provincial championships.

Last August, they competed at the Eastern Canadian championships in Fredericton, New Brunswick and went 7-1 in the tournament to capture the silver medal. “It was a pretty fun experience,” said Nielissen, who was named the tournament’s top hitter with an
outstanding .820 batting average. “When we were down there we met teams from Quebec, New Brunswick, PEI, Newfoundland and Nova Scotia. We talked to them off the field and during the game we’d be enemies and when you get the off the field you talk to them just walking around the ballpark.”

In addition to the on-field game play and the challenge of playing centrefield as well as shortstop on occasion, Nielissen enjoys spending time with friends at the ballpark and away at tournaments. He loves the social aspect of softball and sports in general. He also plays hockey for the Quinte Red Devils U15 AAA team and enjoys golfing as well.
“What I love about (sports) is you get to meet new friends,” Nielissen said. “You also get exercise out of it, too.” Softball is a great summer sport following a busy hockey season at the AAA and high school levels.

Nielissen started skating as a toddler and began playing hockey around age four, starting in Loyalist Township before playing a number of years in Kingston. He’s a left winger and considers himself to be a strong two-way player on both sides of the puck. Now with the Red Devils, Nielissen believes the move to Quinte is good for his development. “You get more exposure when you’re in Quinte,” he said. “The jump going from Kingston to Quinte was a pretty big jump. I thought I got better over the year just with the good coaches we have.”

He has aspirations to play at the junior level in hockey and “just see where it takes me.”
For softball, his goal is to play for Team Canada one day and represent his country. Of course, he’s hoping for another great season with the Express as well.
…
Softball Napanee, established in 1980, has hosted numerous provincial championships and six Canadian championships. Express teams have found great success at the provincial and national levels over the years. Indoor workouts are underway for the 2022 season, which will hopefully be a return to nearly normal for the local teams.

In regular seasons, Napanee Softball offers Express rep teams at a number of age groups for boys and girls. The organization announced the return of the spring training indoor sessions in early February, noting “they are a great way to get ready for Softball Napanee’s upcoming competitive ball season. The indoor sessions will prepare athletes for our team tryouts in the spring.”

Registration is required to attend and the fee is $10 per athlete. Please register on the Softball Napanee website where some schedule information is also noted for U8, U9, U11 boys, U11 girls, U13 boys, U15 boys and U17 boys. “Please note that athletes 12 years of age and older are required to be vaccinated to participate. This is a requirement of the provincial softball organizations. Please also note that spectators will not be permitted in the gyms for our sessions. Athletes will need to be dropped off with coaches at the school doors.” All clinics will run until the week of April 25. The organization notes U13, U15, U17 and U19 girls teams had tryouts in September and rosters have been confirmed. House league softball is also offered from U6 to U16.

For more information and to watch for 2022 details, check out softballnapanee.teamsnapsites.com.