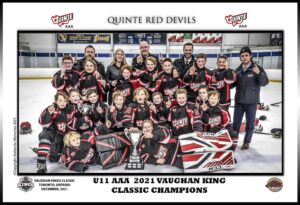 The E360 Solution U13’s added two more points this weekend.  On Saturday, they travelled to Oshawa to face the Generals. The Devils got on the board quickly. Ty Leavitt to Ryan Foley and in the net, followed quickly by goal by Nate Rashotte.  The first period would end with another goal by Foley and the Devils were up 3-0 at the end of the first period.  Foley with a pass to the point and Galen O’Shea with a beauty shot that hits the back of the net and the second period would end with a score of 4-0. Ryan Sherwin to Rashotte with a top corner shot and then Foley with a goal to earn a hat trick.  Charlie Vos takes home the shut out with a 6-0 win over the Generals.

For their last regular season game of 2021, the team hosted the Markham Waxers in Madoc.  The U13’s had a tough go with only one goal scored by Maclean Chisholm, assisted by Rashotte. Quinte loses 5-1 to the Waxers.

Up Next:  the E360 Solution  U13’s have a break and time to prepare for the Toronto Marlboro’s Holiday Classic Tournament taking place Dec. 27th-30th.

Coming off of a 10 day Covid-19 quarantine, the Stampkrete QRD U12s were able to get one practice in before travelling to Barrie on Saturday to take on the 1st place Colts. QRD came out hot, as Dawson Chalk accepted a pass from Ewan Dahle and blasted a slapshot past the Colts tender to put Quinte up 1-0. Just over a minute later, Chalk would return the favour, as Lauchlan Whelan and Chalk would set up Dahle to put Quinte up 2-0 after the 1st period. In the 2nd Trent Clow would score the lone Quinte goal with assists from Dahle and Coen Lowry. QRD would continue the onslaught into the 3rd with goals from Ben Hunt (assisted by Joey Seguin & Easton Thompson), Dahle, and Thompson to secure a 6-0 win! Ryerson Swan had a stellar game between the pipes, securing the shutout.

On Sunday December 12th, the Stampkrete QRD U12’s hosted the Clarington Toros in Madoc. Clarington was coming in hot, as they recently had won the Hamilton Tournament. After a back and forth scoreless opening period, QRD would open the scoring with Hudson Brown potting home a rebound from a Kalum Phillips shot from the point. Coen Lowry would then tip home another point shot, this time from Andrew Dewar putting QRD up 2-0. Quinte would take a commanding 3-0 lead after Joey Seguin banged home a rebound from a Maeve Aird shot. Clarington would not give up, as they scored 2 of their own late in the period to tighten the game 3-2 with 1 period to go. Lowry finished off a feed from Brown and Clow in the 3rd, before Dahle would restore Quinte’s 3 goal lead to make it a 5-2 game. Clarington replied quickly with 1 of their own to tighten the game to 5-3, as the two teams battled for every square inch of ice. Clarington would not back down, scoring again with 1:15 remaining, before scoring again with 37 seconds left in the game to even the score 5-5.  Ryerson Swan secured the tie in net for Quinte

The U14 Free Flow Petroleum Quinte Red Devils played host to the Richmond Hill Cyclones on Sunday at QSCW.

Late in the first period, it was Liam Campbell (assisted by Kaden Koutroulides and Jake Campbell) who got the Devils on the scoreboard first.

Maintaining momentum, the U14s Liam Campbell (Cooper Kelly and Tavin MacDonald) scored his second of the game, to start off the middle frame. Only a minute later, the Devils had their third, by Jake Moore (Graydon Walst and Matthew Airhart). Tipping the scoreboard one more time, the U14s secured a 4-1 victory. The empty net goal came from Airhart (MacDonald). Katste Brant was in net for the U14s win.

The Free Flow Petroleum U14s have a busy week ahead, with two games on the road (Monday and Saturday). Before their final home game of 2021, at the QSWC on Sunday at 12:30pm.

This gave them some time to give back to the community by donating their time to Gleaners food bank. The rest of the boys are going back on Wednesday to give some much-needed help to a great organization.

On Deck:  The Madison Excavating Red Devils will play 3 games this week. Two home games starting with the Whitby Wildcats on Thursday and the Ajax Pickering Raiders on Saturday and then Sunday they will travel to St Andrews collage to play the York Simcoe Express. 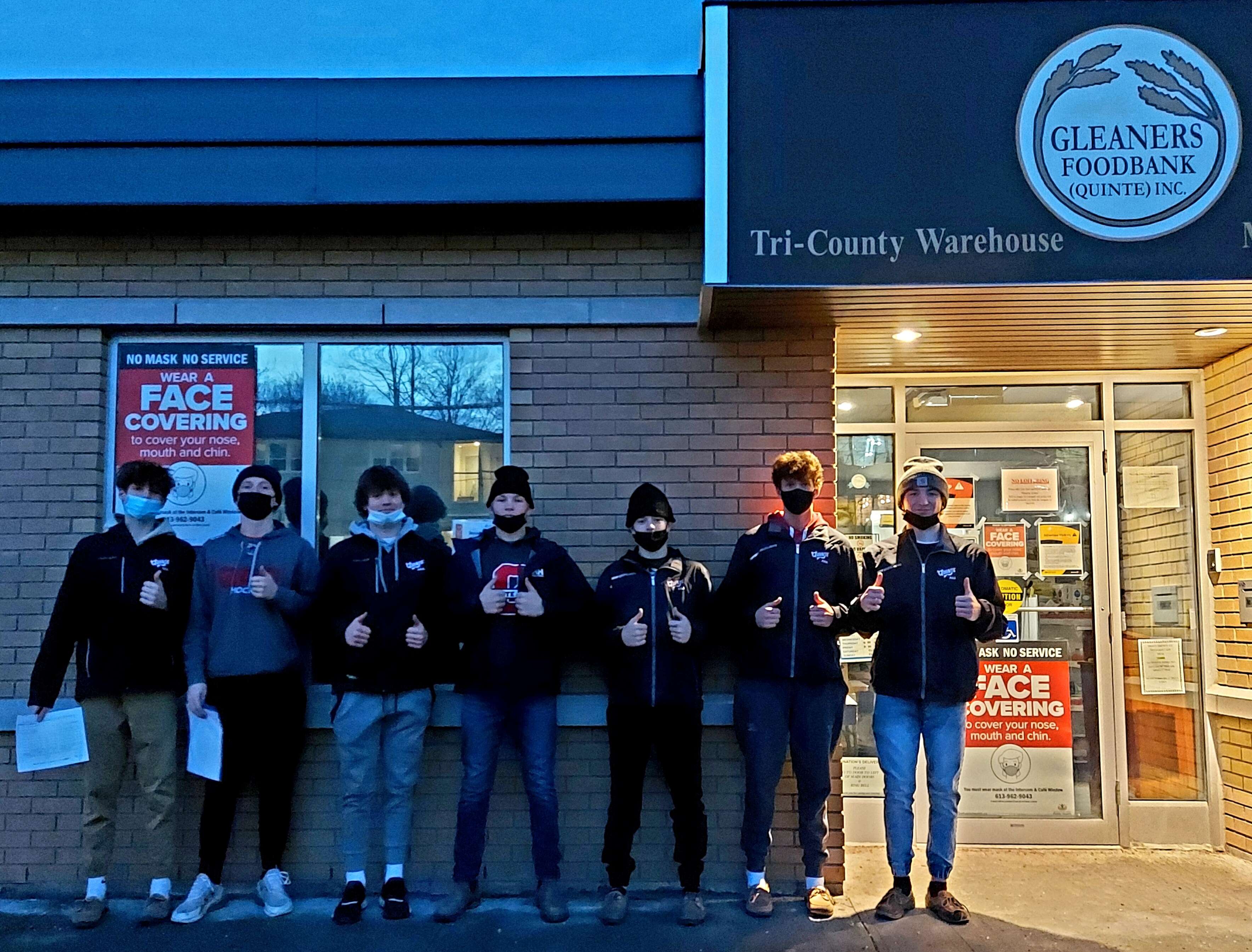 The Quinte McInroy-Maines U18 Red Devils picked up one win in two ETA league games this past week.
The U18s lost a mid-week tilt with APR 5-0.
Devils of the Day were Brayden Friedrich, Alex Delisle and Aiden Haller-Brady.

On Saturday, the U18s rebounded with a 3-1 win over the Kingston Jr. Gaels.
Friedrich picked up the win in goal while Kellen Dostaler, Liam Reid and Jack Dever scored for QRD. Kyle Ramsperger (2) and Ethan Osborne picked up assists.
Devils of the Day were Ramsperger and Reid.

On deck: The U18s are off until the weekend when they host the Oshawa Generals on Saturday and then head to Orillia to face North Central Predators on Sunday.

The Borchert’s Roofing QRD U11 AAA Team travelled to Toronto this past weekend to participate in the Vaughan Kings Classic Tournament. The Devils started out the tournament with a 3-0 forfeit win when the Barrie Colts had to drop out of the tournament due to covid protocol. In game two of the tournament, the Team were firing on all cylinders and skated to a 4-0 win over Ottawa Silver Seven. James Gullage opened the scoring for the Devils, while Thomas Marsden, Brody Grant and Noah Hughes also lit the lamp in the game. Assisting on the goals was Cameron Stevens, Miller Nicholson, Shea Teather, Mason Whalen, Jaxson Plummer and Hughes. Dax Sage was solid between the pipes to earn the shutout. Thomas Marsden was player of the game.

The Red Devils continued to build off of their strong team play from Friday, when they defeated The Burlington Eagles 12-1 in their first game of the day on Saturday. Noah Hughes scored 4 goals in the game and was named player of the game. Nicholson (2), Grant, Stevens, Whalen, Teather, Rowyn Haley and Gullage also found the back of the net in the game. Chipping in with assists; Stevens (3), Teather (2), Nicholson (2), Gullage (2), Haley (2), Grant, Hughes and Grady Riley. Matt Travers was sharp in net for the win. In their second game of the day, The Red Devils lost 5-1 to the #1 ranked Toronto Junior Canadiens. The boys showed up late to the game and were down 4-0 before they knew it. Brody Grant scored the lone goal of the game, from Teather and Marsden, and the team played a solid second half of the game. Sage and Travers shared the net in the game.

After going 3-1 in round robin play, the Red Devils would advance to the quarter finals on Sunday morning at 7:45 vs The Southern Tier Admirals. This was an important game to the team, as the Admiral’s were the only team to defeat the Devils in their novice year, and the boys had not forgot. Hughes, Gullage and Holden Goulah all lit the lamp in the 3-2 win. Dax Sage was sharp in net and earned player of the game.

In the tournament semi final, The Red Devils would get another chance to play JRC. This time the team came ready to play and although the Canadiens scored first goal in the game The Red Devils came right back, scoring 4 unanswered goals to take a 4-1 lead. Matt Travers was stellar in the net for his team, making several key saves throughout the game on their way to a hard fought and well deserved 4-3 win. Scoring for The Devils; Teather, Hughes, Plummer, Stevens. Assists going to Riley and Haley. Riley was named player of the game.

In their third game of the day, the Red Devils would face the #2 ranked Toronto Marlboros. Once again, the team found themselves down 1-0 in the game, but continued to work hard and scored 3 unanswered goals to take the lead. The two teams would exchange goals in the second half of the game and the score was tied 5-5 at the final buzzer! The teams were set for 3on3 Overtime, and it took Grady Riley just 33 seconds to win the game for the Red Devils.  Nicholson, Haley, Hughes, Stevens and Plummer also had goals in the game. Chipping in with assists was Stevens (2), Riley, Whalen and Edmund Dowling. Sage was solid between the pipes in a huge win for the team.

The Coaching staff and families of the players could not be more proud of the way the team came together and competed hard to win the top tournament of the year.

On Deck: The Red Devils are back in action next weekend with two league games: Saturday 3:15pm in Marmora vs Whitby and Sunday 1:15 at Markham.

The Gillespie Tree Services QRD U10’s traveled to Markham on Saturday to take on the Waxers. The 1st period was a great back and forth effort which resulted in a scoreless opening frame. The Waxers would take the lead with 2 goals in the second period. In the third period persistence paid off for the young QRD team as they were able to score 2 goals to tie the game and leave Markham with 1 point. Hayden Tripp got the start in net and came up with some big saves down the stretch to secure the tie.

After a hard fought tie on Saturday the QRD squad looked to hold on to that momentum while hosting Whitby. From start to finish the QRD team controlled play and picked up their 1st win in the last 6 games with a 6-0 victory. Hayden Tripp and Logan Skutovich shared the goaltending duties and shut down the Whitby Wildcats shooters.

Coaches Corner with Head Coach Andrew Brown:
“We focussed on getting better everyday during the first half of the season, that is what we have accomplished. Every member of the team has played an important role in creating a real positive, fun and team first environment. We look forward to the holiday break as we re-focus toward our 2nd half of the season and the excitement that follows”.

The U15 Pita Pit Quinte Red Devils took 3 of 4 points this weekend. On Saturday, with Liam Boyer between the pipes, they tied the North Central Predators 2-2. Goals scored by Parker Ferguson and Sam Thompson.
On Sunday, the Red Devils goaltender Reece Herman led them to a 3-1 win over the Ajax-Pickering Raiders. Goals scored by Evan Erwin and Zack Carrier (2).

On Deck: The U15 Red Devils take on the Central Ontario Wolves at home on this Saturday at 2:30 pm.  On Sunday, they hit the road to take on the Richmond Hill Coyotes at 7:15 pm.